Our morning tour was picking us up at 8am so we were up early – had a sore back due to the extremely hard beds ! We loaded our backpacks, put on the sunscreen & doused ourselves in “Aerogard” ready for our adventure, we were picked up in a safari truck – looked like an ex army lorry. We travelled for about 45min up into the green lush tropical hills. hair going every where – so much for brushing.it would be nice to actually have a photo where your hair isn’t limp or all messy or have sweat all over your face!. 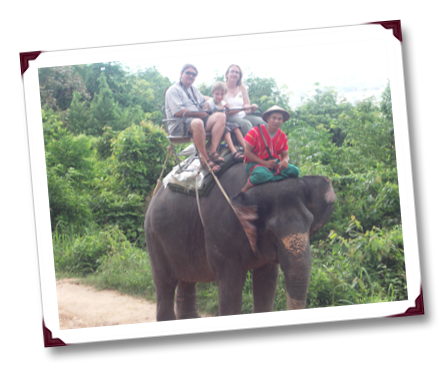 We arrived at the main office & waited for the rest of the guests to arrive then we were given stickers with our guides name on it “Aeid” & got back into our naturally air conditioned  vehicles & travelled further up the hills into the “jungle”, which also leads to the very Big Buddha, overlooking the area from the mountain tops. We turned off onto a dirt road, a few bumps & then we were there. We first saw how they train the macat monkeys to pick the coconuts, by spinning them on the tree, 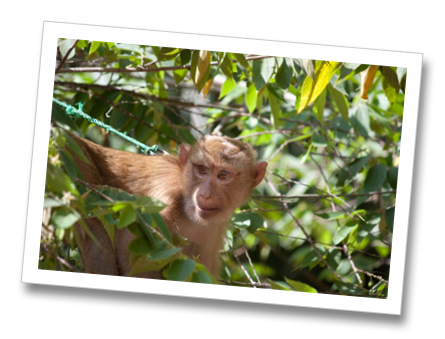 next we got to sit on the water buffalo – he was very placid & was going to the toilet the entire time..about 100 lt , for pictures & ride around a circuit on a cart pulled by the water buffalo. Next we watched a lady de-husk a coconut & open in – we all tried the juice which tastes like water- not milk like you expect, she then grated the fresh meat, using a traditional tool & we then tried the flesh. To make the coconut milk she squeezed the flesh & that juice is the milk. Next we saw a demonstration of making coconut oil & tasted the left over’s from the process which tasted like cocoa..Next we saw how they tap the rubber trees & make rubber,-a touchy feely experience, we then were introduced to 3 young female elephants 5,4 & 3 years old ..they did a few tricks – painted etc & then had a photo opportunity & were able to buy some fruit & feed them, then it was off for our elephant safari trek thru the jungle – much larger & older elephant – they needed to be with our combined weight !. Our elephants name was “Boar” he was 26 & weighed around 3 tonne, we were seated on a bench like chair across his back, we trekked up & down designated paths – if you could call them that &  saw some nice views of the towns & the beaches of Chalong Bay, below. Our mahouts’ swapped cameras a few times- which could be a hair raising experience or I should say trunk raising !, so we could get a few more photos on board our large rides. After about 1/2 hour of bumpy riding we came to the end, our mahout took us a slightly different route & we saw the big Buddha statue on the hill more closely. 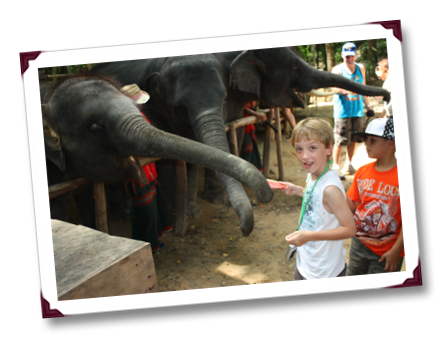 We bought some more fruit (100b) & fed boar, tipped our mahout 200b & then off to eat a buffet lunch where we had rice, sweet & sour chicken, fish, vegetables, fried onion rings, lettuce & corn & fruit. We then were driven back to the main facility & bought photos which were taken by the staff, then driven back to our hotels in a more luxurious mini bus- thank goodness for A/C!. As we were driving along David pointed out some road signs -tsunami evacuation route markers.

Once back at the resort we quickly put on our swimmers & jumped into the pool to refresh. It was happy hour so we had a few drinks at the pool bar – I had “Mai Tai’s” this time.not too bad either. Around 4ish we got changed & went out to do some shopping – still too humid ! .After dragging Brendan & David around for a few hours we stopped at a Mexican restaurant called Coyote & had tea. Brendan & I shared a nacho’s & David had beef & chicken skewers – the view was good – once you got past the rats nest of electrical wires! .All along the beach front are open bars & food outlets. We found another good sign “drunk crossing “. 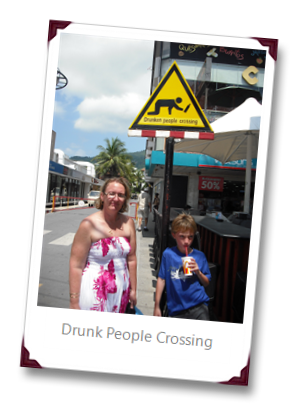 We headed for Bang La Rd which was really more bars & night clubs – good if you we single or enjoyed that scene. We walked back to the hotel stopping every now & then to look at bits & pieces , haggling with the store owners. We finally went into a pharmacy & got Brendan some eye drops – people were commenting on them just about every where we went ! and they really weren’t that bad..by the time we got back to the room our feet were killing.A nice cool shower to freshen up then we all hit the hay.