We woke to another beautiful day, had breakfast & got ready for our tour pick up at 9am. Of course they were 10mins early & we were not ready.we quickly grabbed our stuff & headed out to the waiting mini bus.We made 2 more stops at various hotels to pick up our fellow passengers, then an hour bus ride to the pier at Leam Mapraw ( which is on the top east side of the island ), from there we jumped into a funky looking bus/ large tuk tuk which drove us to the end of the pier for us to then board our boats – English speaking on 1 & German on the other. We made the 1 hours boat ride out to Phang Nga Bay with good spirits & were introduced to the captain “Uusa” who explained the rules & how to get into the kayaks – (which were rubber), itinerary & about the tides. The first stop was at Koh Phanak ( this area has been used in various films) where we got into kayaks – our paddler’s name was Kibblie, and went into the bat cave. 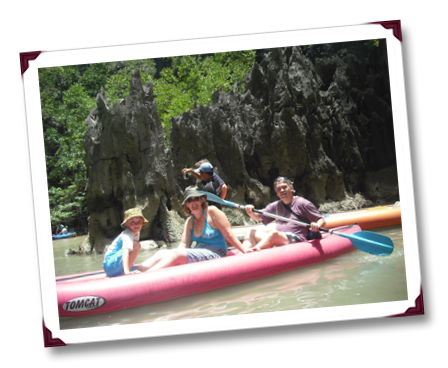 Brendan was at the front, I was in the middle & David at the back of the kayak with Kibblie, he paddled thru the entrance of the cave  which soon turned pitch black, Brendan had a torch which he was shining on the ceiling & we soon saw lots of bats on the walls & ceiling ( you had to be careful not to open your mouth in case you got bat weed on!) at the end of the cave was a small opening which we had to fit under – we had to lie down flat to make it under the stalactites  then it opened up to a lush lagoon, the walls were limestone & covered with thick, dense forest, we paddled around the area for about 10 mins as the tide was rising & if we didn’t get out soon we wouldn’t make it. It was our time to go under, we had laid down & were going thru.oh crap there is no way we will make it .the rocks were mere millimetres away from my glasses.I’m yelling out to stop I’m about to hit when psssssssssst Kibblie lets some air out of the boat, we go thru ..just, it was the most awful feeling.I like going into caves & don’t think I am claustrophobic but this was nerve racking, I didn’t know what was worse – closing my eyes or having them open…we got back to the boat & we all told our stories..some people had grazed legs & arms from where they scraped against the rocks, others had bumps on heads & a few like us who were at the end had to let the boats down to get thru. 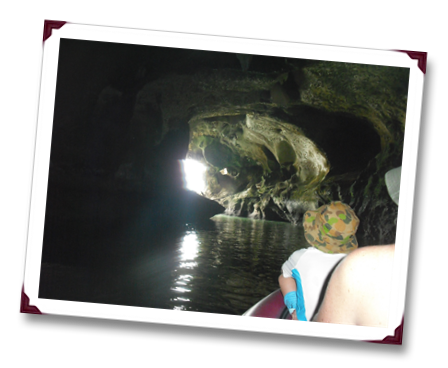 Next onto Koh Hong  – Pillow Island, once again into the kayaks & under a small narrow entrance to get to the lagoon, this one had mangroves in the middle where we were shown a walking fish that lives in them, the water is quite green & limestone walls. There was a storm coming as could hear the thunder & see the front moving in , but Uusa seemed to think we would be ok. The last stop was a Koh Yai where we could jump off the top of the boat into the water , David went from the top but Brendan wouldn’t but he did made the jump from the bottom level, before getting on the kayaks to the cave, this one wasn’t dark & only had 1 small low area where we had to lie down before opening up to the lagoon, the waters were shallow & after we were shown around we could hop out & look around, Brendan was trying to catch the walking fish ! we had a few photos & were off back to the boat where we had a buffet lunch which included soup, fried rice, calamari, chicken drumsticks, chicken & cashew nuts, fish & pineapple, while travelling to the Beach which was an hour journey, but it went really quickly as Uusa was doing towel tricks with the passengers, getting lids out of bottles using a straw & having the kids form a circle on the deck having a hair race on a platter of cold water- wham he splatters it everywhere & the kids get all wet- it was really funny. The Beach was  long & narrow  the waters clear , really warm & very salty – we floated really well., we swam here for about an hour & Brendan & another child – Mathew played with the kayak. We were then paddled back to the boat where once again you could jump from the top – Brendan did this time..The storm, just, caught us – a few heavy drops, as we headed into the jetty. Back to the bus & to the hotel for a nice hot shower then off to dinner. Brendan wanted the green curry with chicken, I had the red curry with chicken & David tried the chicken with cashews. The staff were really surprised that Brendan had the curry – it was hot. He at the lot. Mine was also hot – my Lips were burning at the end, David’s was very mild, but at least we are trying something different. Happy hour again & after 2 daiquiris I was ready for bed.