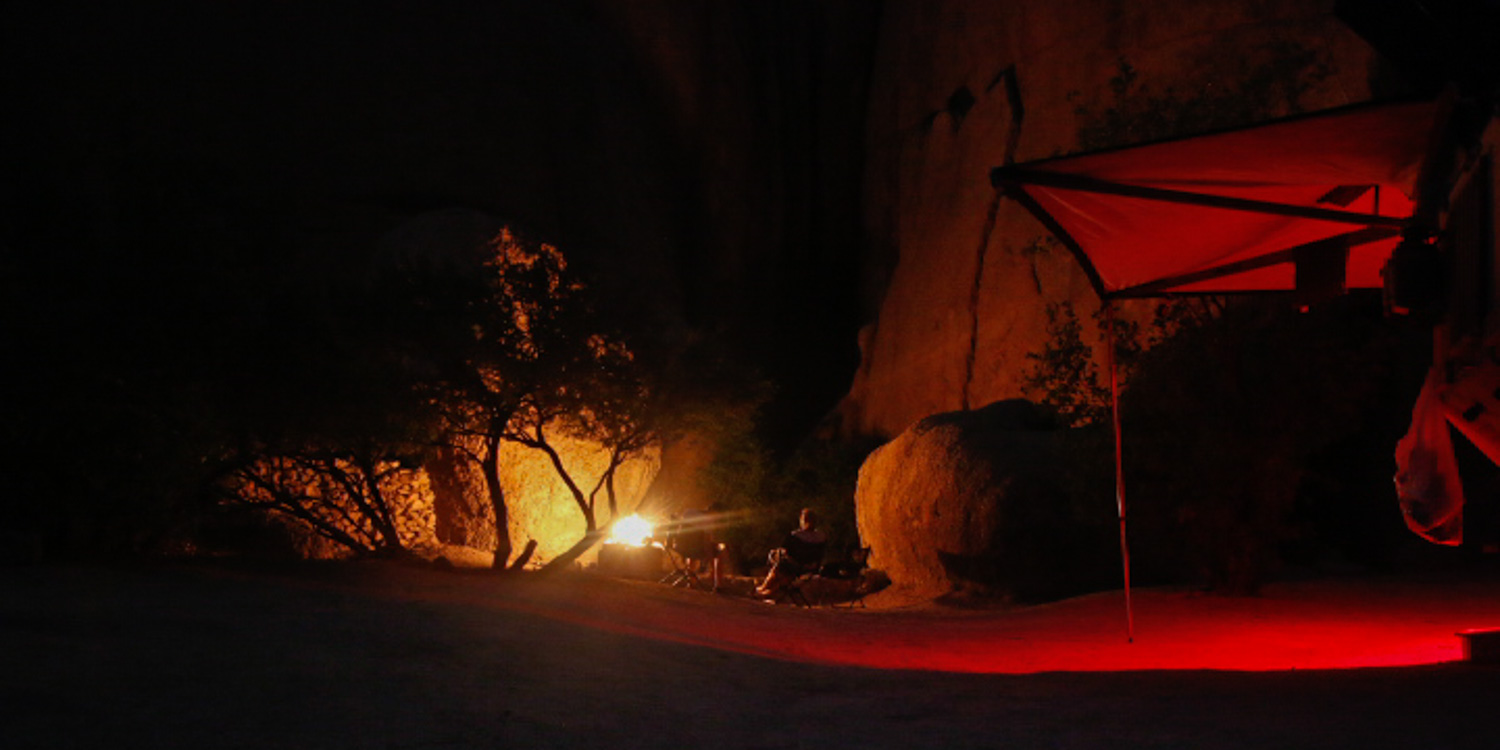 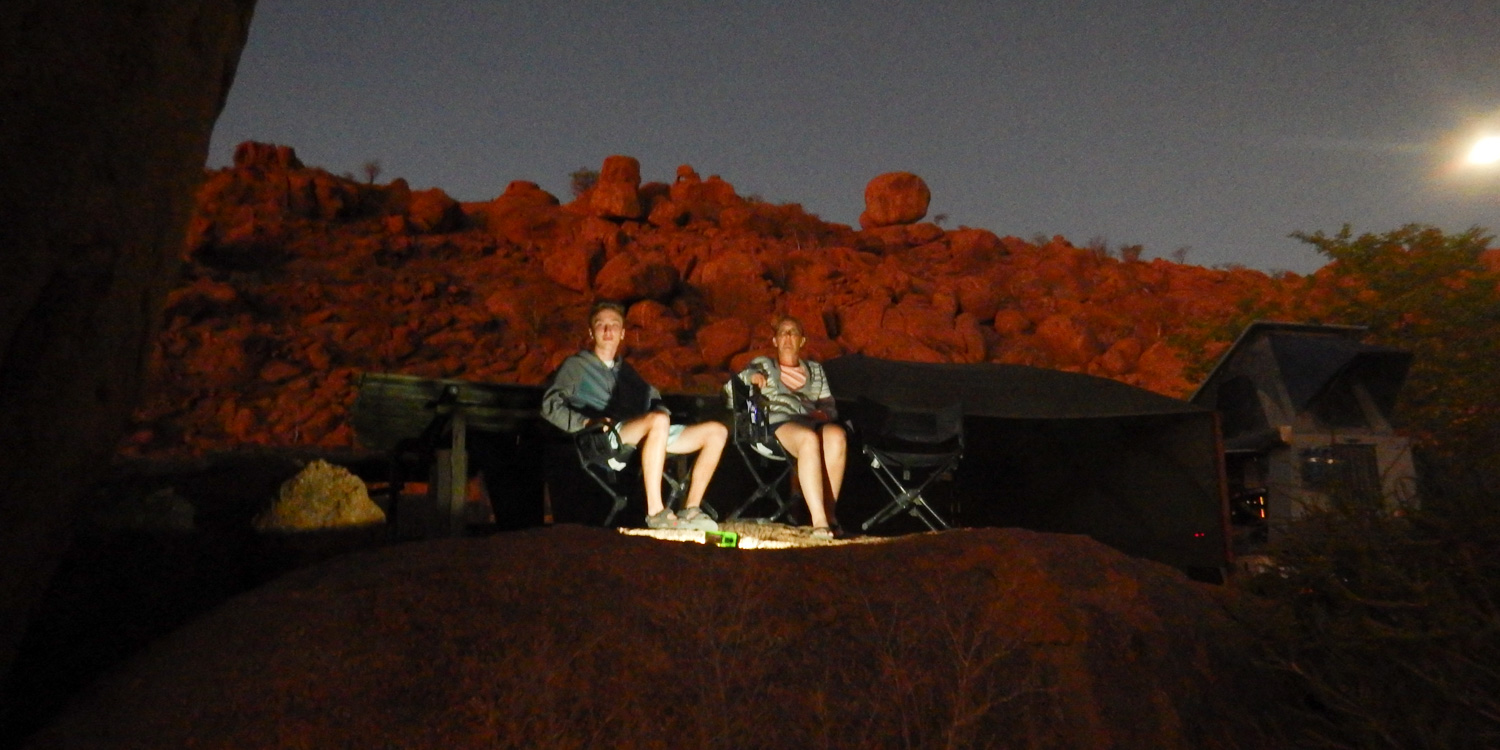 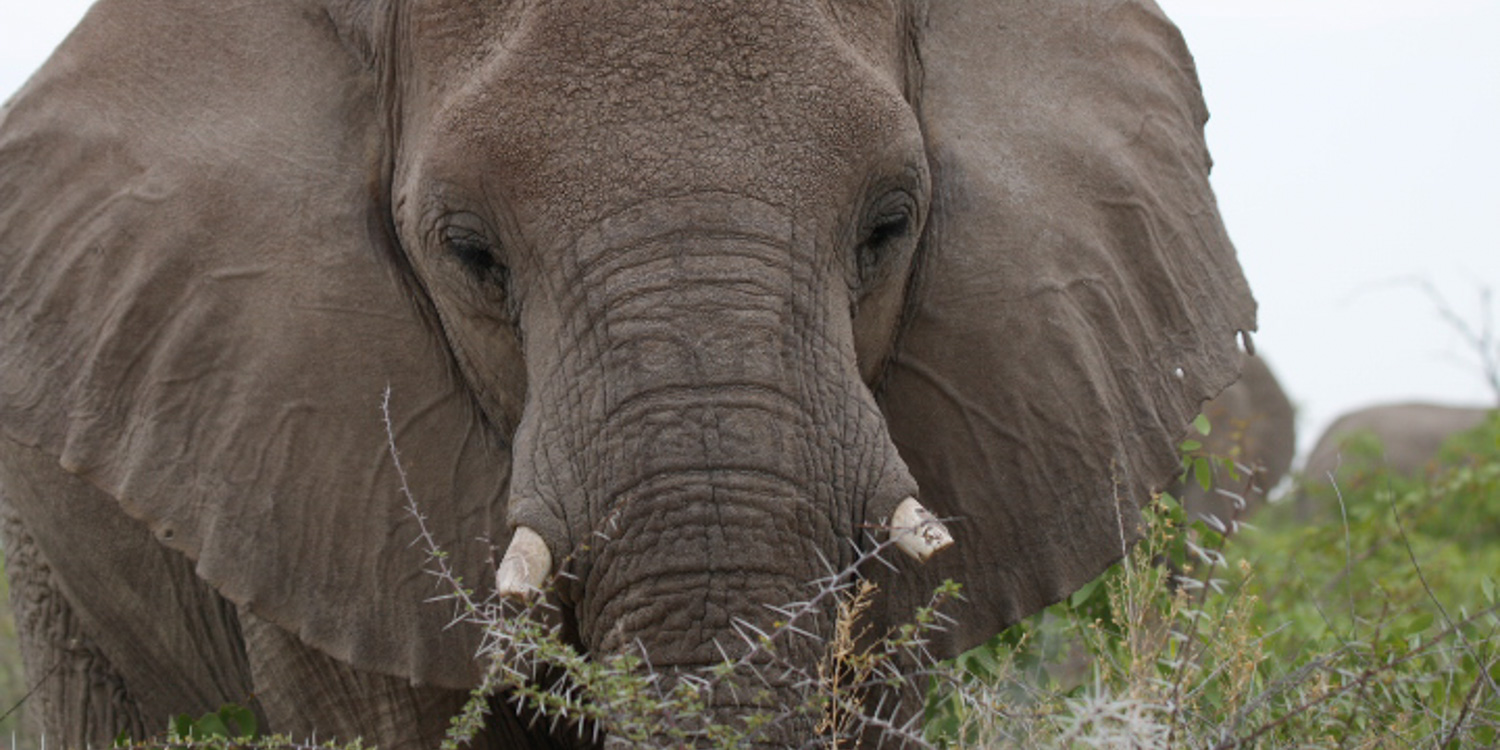 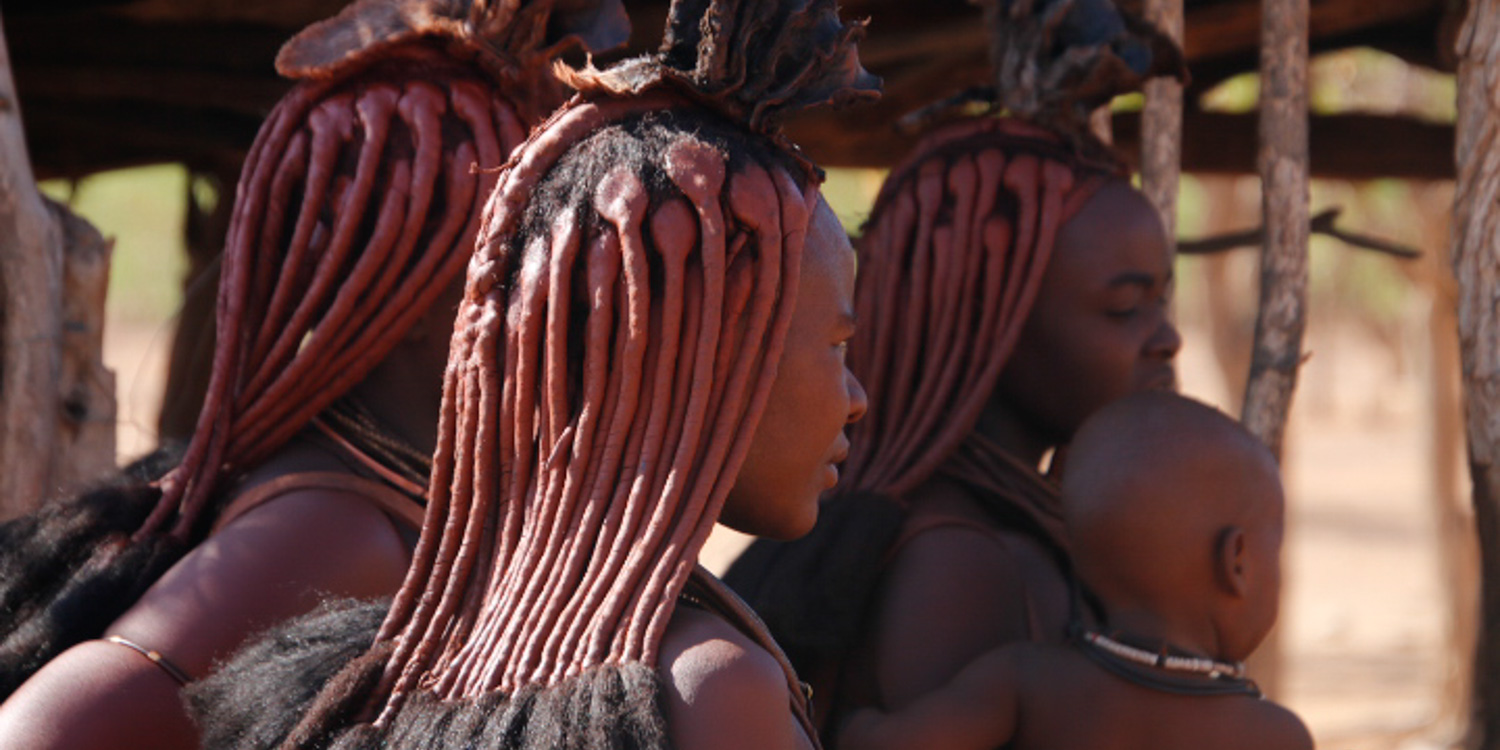 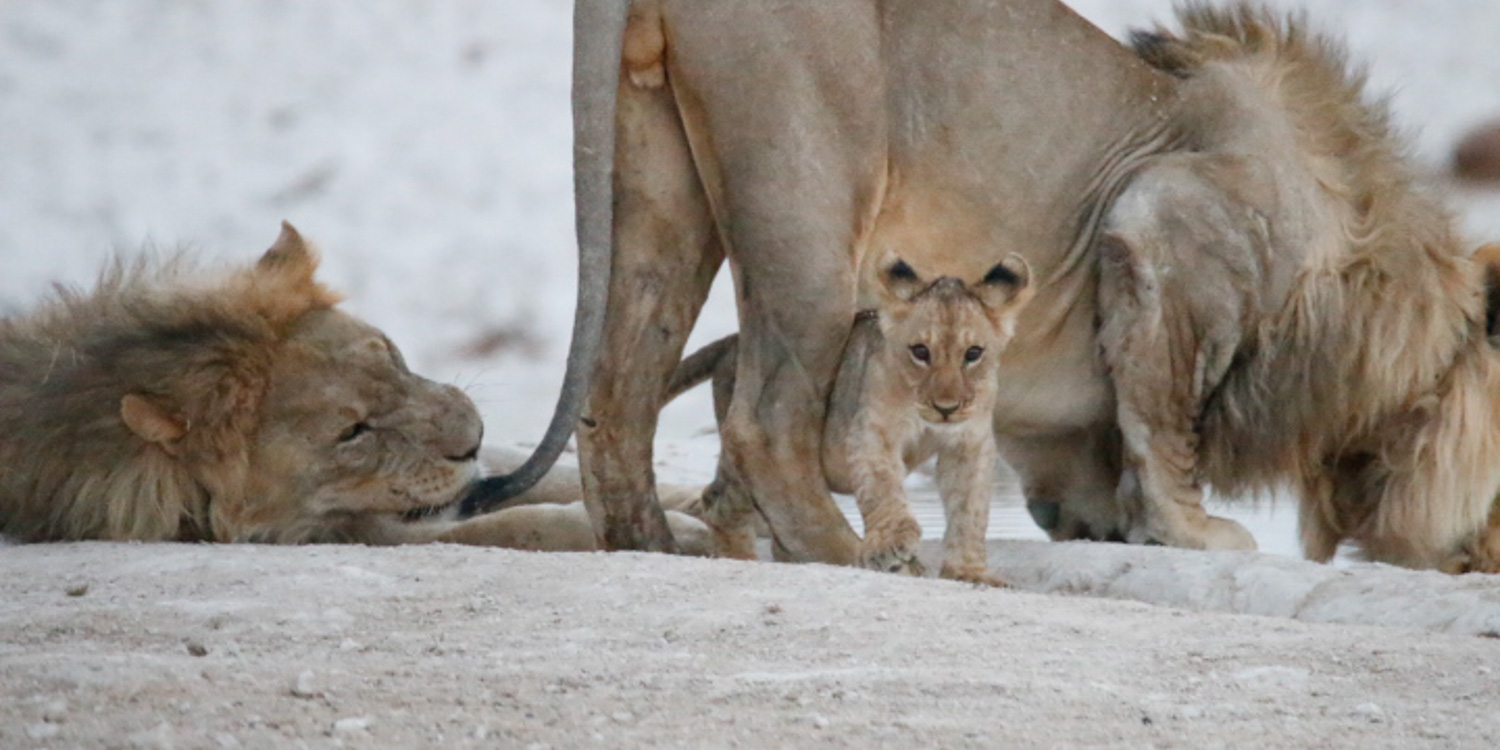 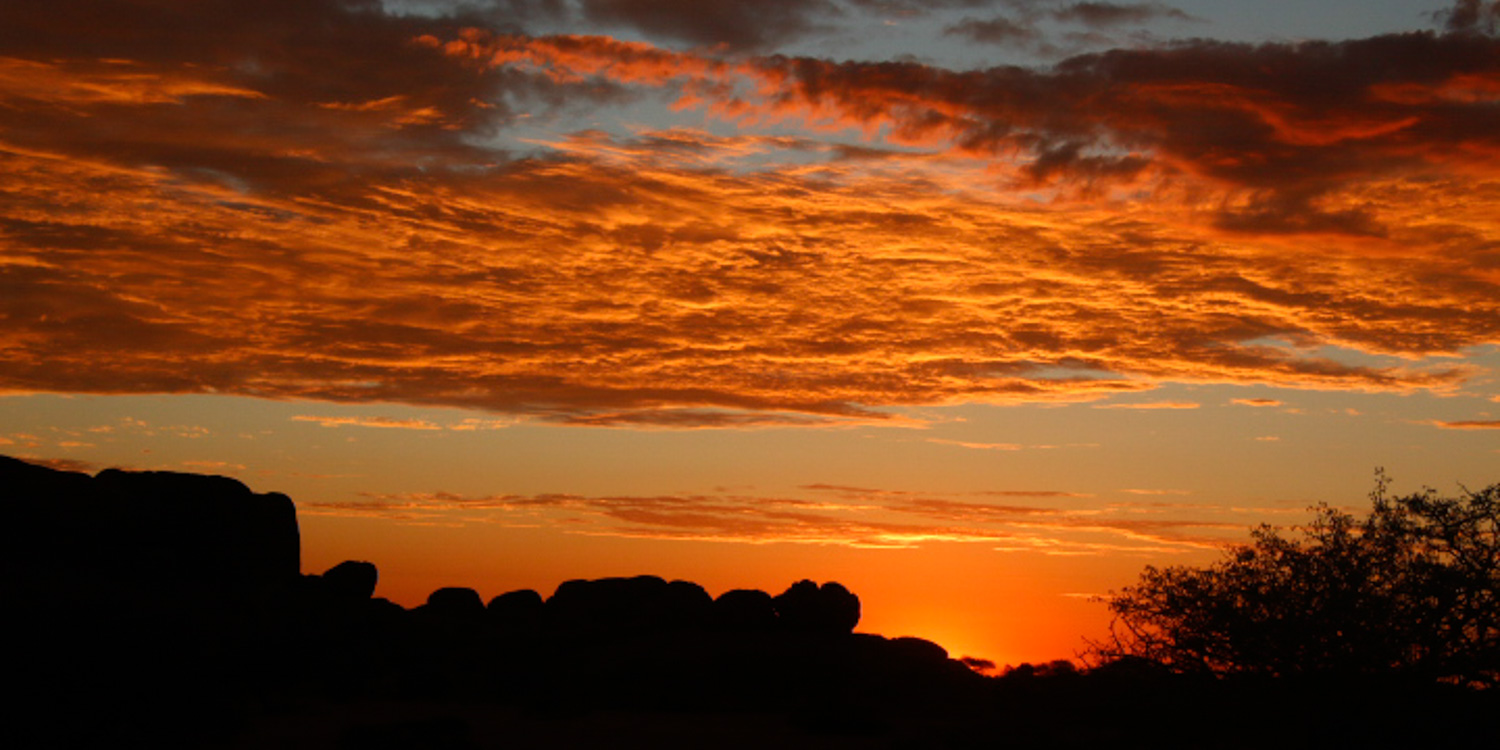 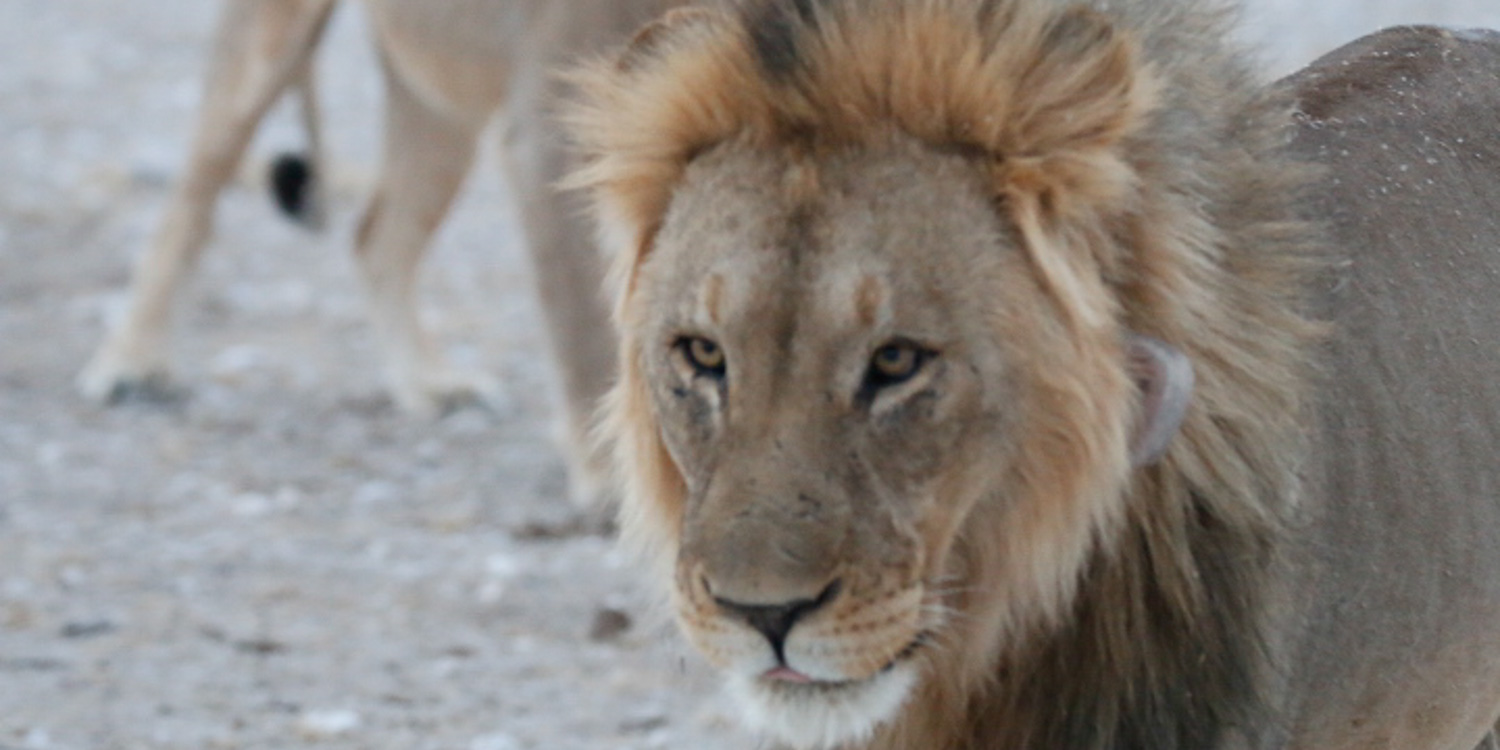 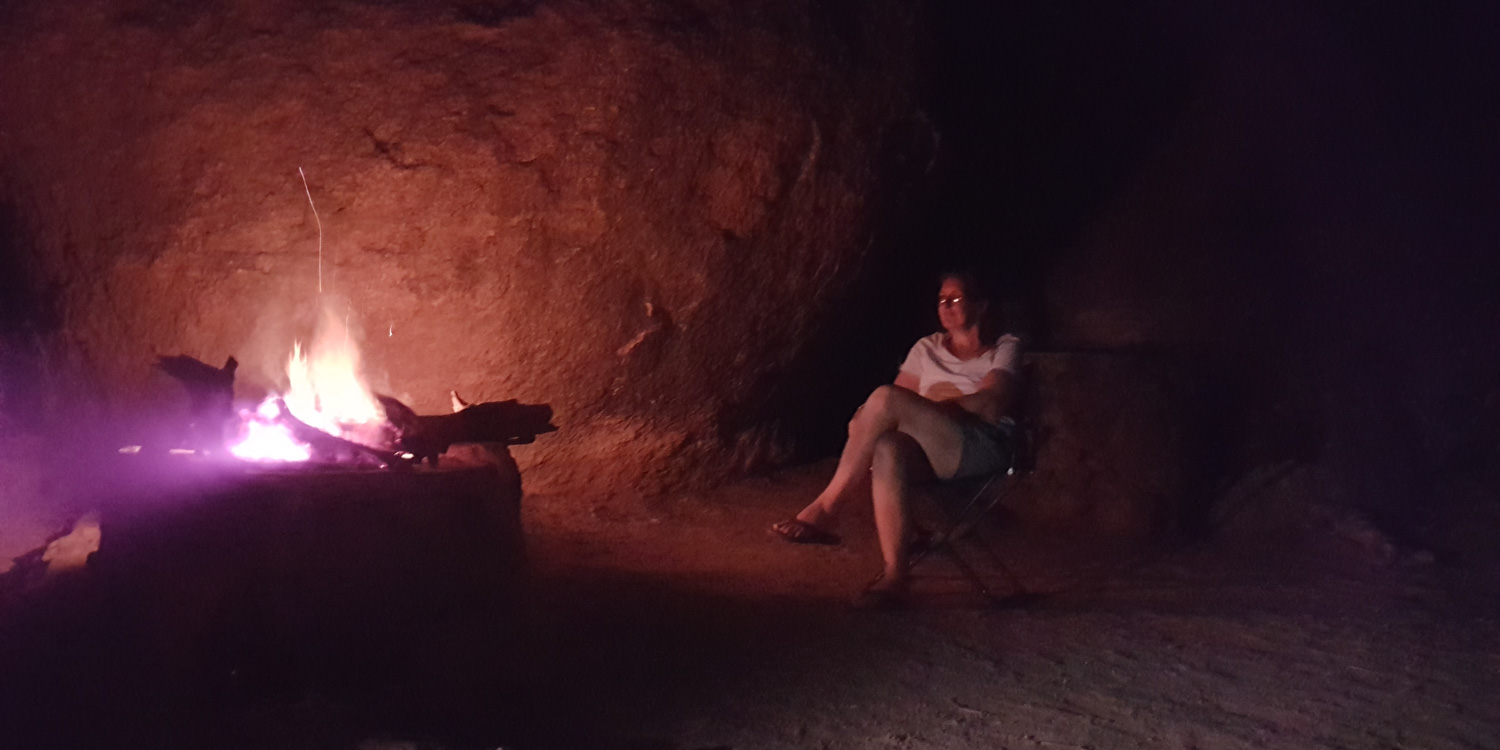 Kylie by the Fire, Spitzkoppe, Namibia

Kylie by the Fire, Spitzkoppe, Namibia

Brendan on the green 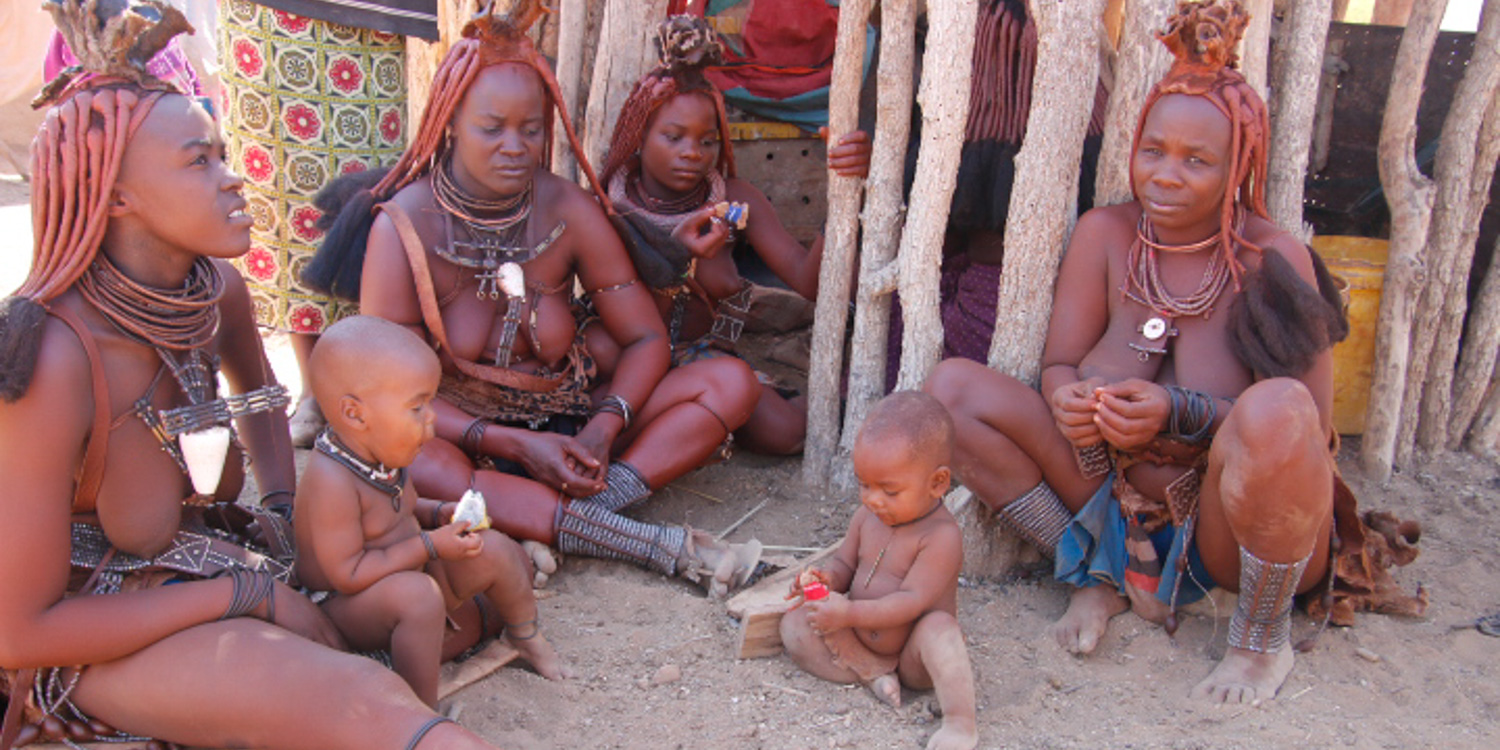 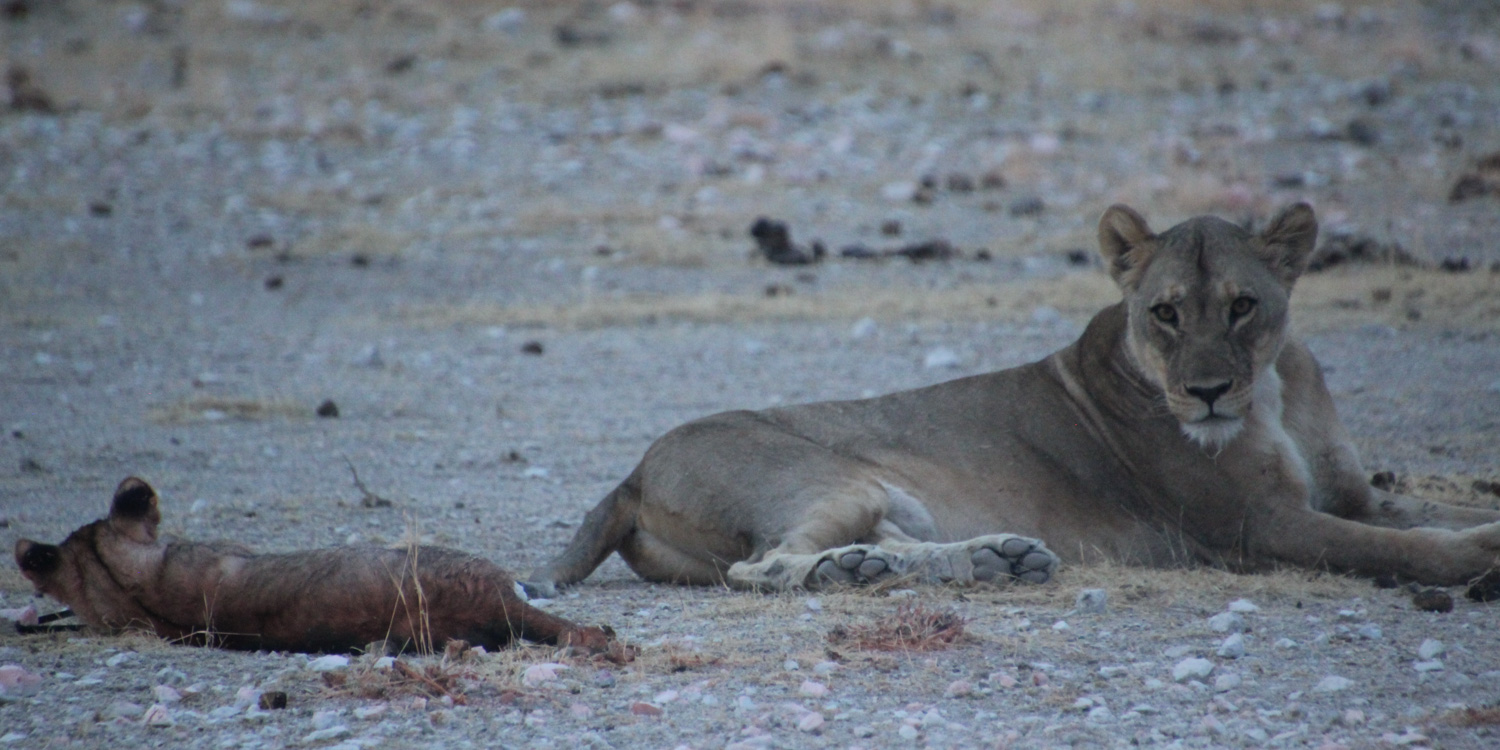 Today was a Lay day, a bit of R & R. We had a play around in the pool after breakfast, then a quick stroll down the street. Brendan found all types of Fanta soft drink, strawberry, blueberry, lemon as well as the traditional orange. After about 2 hours of saying “no thank you ” we headed back to the hotel for another swim.

We had a few drinks at the pool & ordered some chips for lunch. 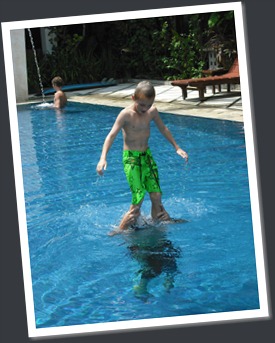 Brendan was picked up at 1pm for a Surfing lesson by 2 of the instructors & Yudah (MBA) came by to make sure all was ok, he was so excited we didn’t even get a goodbye,  David & I went back to the room & changed clothes as we were going to walk down to the Hard Rock cafe where the lessons were being held – was sooo hot, only about 5min had passed & my clothes were drenched & I’d forgotten my hat. It took around 1/2 hour walking to get there. We found Brendan (only because he had his new bright green boardies on) & he was already up & on the board. We stayed, watched & took heaps of photo’s for about an hour before we made our way back.

We made a stop at Bruno’s Bar (Jarrad recommended) , which was a little stall on the beach, but he wasn’t there, so we kept going. We made it back & grabbed a cold drink ( I so needed that) before waiting for Brendan in the front lobby to get back..he was returned on the back of one of the instructors motorbikes – he really liked that. 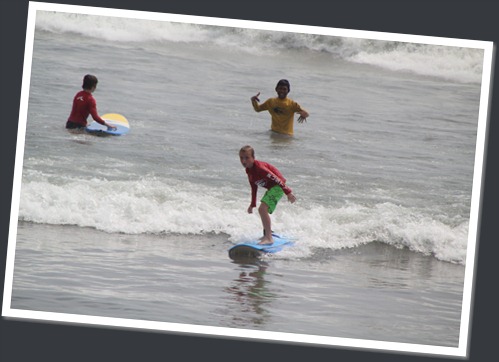 More swimming & drinking before we decided to set out to find a different restaurant for tea.

We walked up Garlic lane 3 times looking for our fixed price shop ( I was getting a bit frustrated ! at this point), then noticed that it would be the one that was closed . After  a bit of discussion we then settled on  Legends Bar  to eat, where David had chicken satays, which came out in a cute cylinder shaped container with charcoals in the bottom to keep it warm.you had to turn the sticks every so often, Brendan had the chicken curry, & I had the beef satays (chicken was nicer). 200,000rp

On the way back to the hotel we stopped off for ice cream at a small shop on the sidewalk & had a chat to the 2 ladies who worked there,

We took a leisurely swim in pool 1 (at pool 2 all the seats already taken) until mid morning, then a quick walk up the street to look at the shops & to see what else we could find.

We found Bali Shop – set prices – no bargaining, we liked this and bought up a few shirts & shorts for David &Brendan.

A quick lunch at Poser’s restaurant – located on the corners of the street our hotel is on. Brendan had a hotdog – wasn’t quite the same as we are used to but he ate it anyway & said it was good, David & I shared a plate of chips. 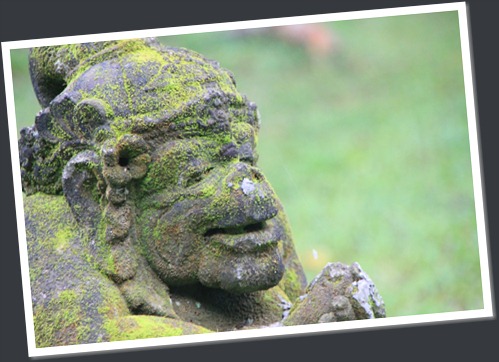 1pm we were picked up for our – Monkey Temple & Tanah Lot tour by Tours East (booked at home using points from The Greater).

Our first stop was at a batik shop where we saw how all the batik was applied by the local village ladies & some weaving; you could then go into the shop & purchase goods if they took your fancy. 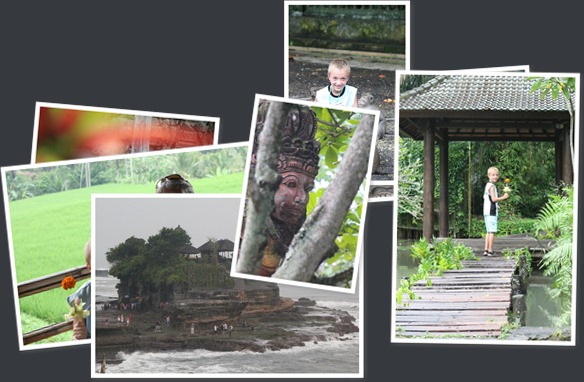 END_OF_DOCUMENT_TOKEN_TO_BE_REPLACED

Brendan was out of bed & up looking around while we were showering & came back to the room all excited – he had seen a squirrel.& we all had to go & look, David & I went outside and vaguely saw an animal which we thought looked like a possum or glider, but as we saw them all day long we realised they weren’t nocturnal & were, actually, a squirrel.

We made our way to the Sunset restaurant & had our breakfast, anything on the menu (included with hotel price)… bacon & eggs it was with a side of toast & some very tasty watermelon juice for me, lemon for David & Brendan went with the OJ, it was really nice food & the chairs overlooked the beach for a great setting.

After breakfast we met up with our tour guide, who had picked us up at the airport, & booked another tour with him for Friday (to the Mt Batur volcano).

We found out that thank you in Balinese was “sook soumon” & your welcome was “ma-warl-ee”.

Confirmed our tour for tomorrow – pick up at 1pm 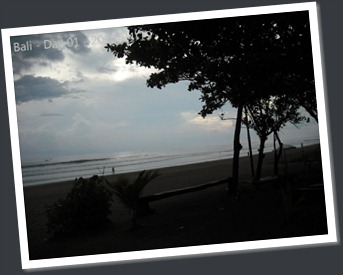 We decided to go out & went for a walk up garlic lane where a lot of the shops could be found. David bought some shirts & shorts, and as we found out later, was totally ripped off on the shorts. Brendan bargained for some hats, we thought he did well at the time – started at 120,000rp for 1 & we ended up with 2 for 100,000rp  (but later we found some for 30,000rp each).

We needed some more local currency so we headed off up towards Kuta to find an ATM (we thought they were an exclusive creature as we hadn’t seen any around. We found the Commonwealth bank & got a million out – that sounds so cool- but in reality was about $A120. On the way back we found a DVD shop (with a/c) and bought up. .the man said we could return them if they didn’t work & advised us which copies were not that great. After spending 560,000rp we returned outside to the stifling humid conditions.

END_OF_DOCUMENT_TOKEN_TO_BE_REPLACED

Another ungodly start to the holidays.up at 5.30am , ready at 6.30am then at the airport at 8am thanks to the quick but still legal driving of uncle Fulv.

Unlike all the other times at the airport where, I guess, I look like a suspect person, David actually got checked for explosives.

We went thru customs & checked out all the duty free goodies while we waited for the flight to be called. The plane was ¾ full. The plane wasn’t as fancy as the others we have been on.didn’t have individual TV screens, only 1 in the middle for every one to watch (and not a very good one at that), the first movie was a Japanese movie with English subtitles, yes, quality TV, Brendan played his game boy & read a few magazines, but this made the flight seem to go on forever.

We finally reached Bali & got off the plane only to wait for about ¾ hour to purchase the visas needed to enter the country. Then about another ½ hour to get thru immigrations, Brendan was a bit put out as there wasn’t any sniffer dogs like Jarrad told us about. It was hot & stuffy & people were getting irritated, but we held up pretty good. We found our driver & started our ½ hour drive to the hotel. While we were driving a big storm hit.welcome to Bali, Harries family! 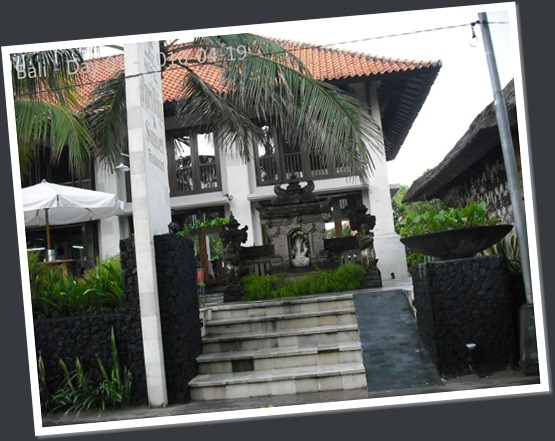 The driver was getting a bit worried, as the lightening strikes & thunder seemed to be right on top of us, the rain pelted down & the roads quickly became fast gushing rivers with water covering the wheels of the mini van in some places. We reached the hotel – just – only to see a torrent of water flowing down the marbled staircase..this didn’t look like a good omen. We checked in and they took our bags – on a nice trolley covered with a black tarpaulin, handed us 3 umbrellas & we paddled thru a foot of water to get to our room, which was no 236 in the first section near pool 1, on the second storey… at least it shouldn’t flood! The room was quite large , all tiled floors – a queen & single bed, side tables, table for TV mini bar kettle etc cupboard & still plenty of room to walk around. All very clean. The bathroom was a large size as well & had American plumbing.

END_OF_DOCUMENT_TOKEN_TO_BE_REPLACED

Chris was determined to pull off a 360 deg turn, on the wakeboard, and after quite a few spills he managed to pull it off!

Unfortunately, he did it after Kylie had stopped taking photos ( though I’m not was when that was, as between her & Jarrad, they managed to take nearly 600 photos!)

So here is what happens when trying to do a 360 degree jump, and your foot comes out of the binding 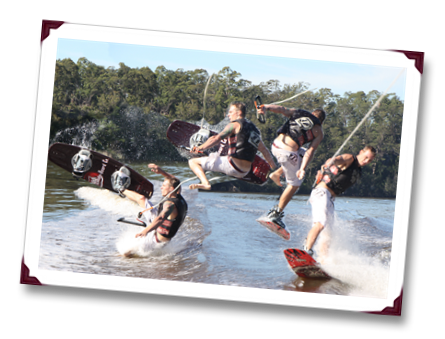 It will be a while before any photos are put up, as I need to really cull the 600 odd photos down to something more manageable 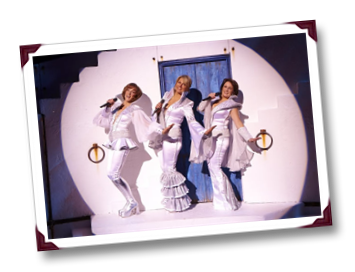 Took Mum & Dad up to see Mamma Mia – The Musical, today. It was their (and our) Christmas present and was at the Star City Casino, in the Lyric Theatre. 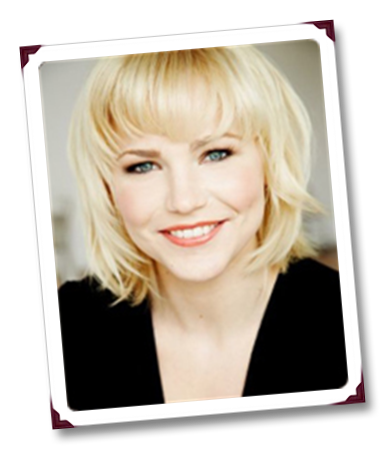 After a bit of a much around with parking, we ended up using the Valet parking, to

save Dad having to walk too far.

Had Lunch there, then at 2pm went to see the show. Everyone seemed to enjoy it, especially Brendan & Dad 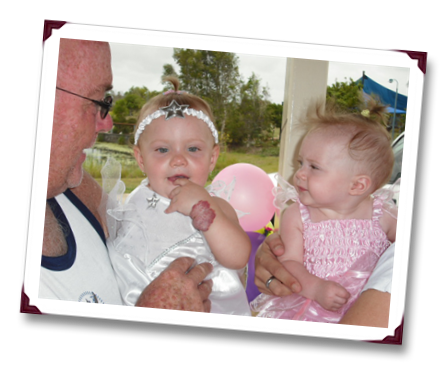 Cloe’s 1st Birthday, was while we were in Caloundra…

Wisemans Ferry over the Weekend 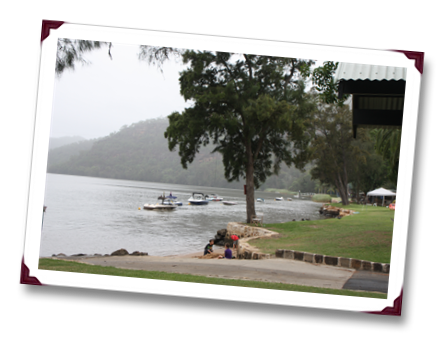 Went up to Wisemans Ferry on Friday night, for the weekend, with Jarrad, Shannon and her family. Unfortunately we didn’t get away until after 7pm so that we didn’t get there until 10pm, then had to put the tent up in the dark (It’s only the 2nd time we’ve put it up, the 1st was when we bought it, about 2-3 years ago).

I quite liked the Hawkesbury river, lots of bends and some moderately long straights, meant that we could usually find a smooth spot 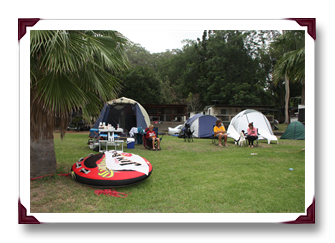 Shannon’s Aunty/ Uncle have an on-site van up there, and the Torrens Ski Garden is a private caravan park, so you need to be invited. It’s not really set-up for “tent” camping, though.

Brendan had a good time playing with Bronte & her cousin Georgia who was about his age. 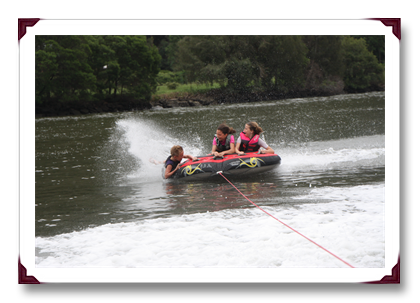 They spent a lot of the time on Georgia’s extra large ski tube.. well mostly on.. they did seem to fall off a lot 😉

Chris surprised us, by turning up on Saturday morning, just as we’d got the boat in the water, as he wasn’t expected until around 5 or 6pm that night.

Saturday was quite hot, yet it rained in the evening , so that Sunday was cool and overcast ( was a bit of a flash back to the 2009 Aus Day long weekend at Stockton beach, weatherwise) 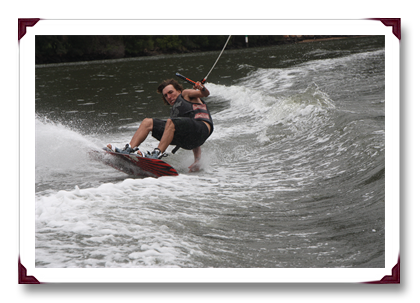 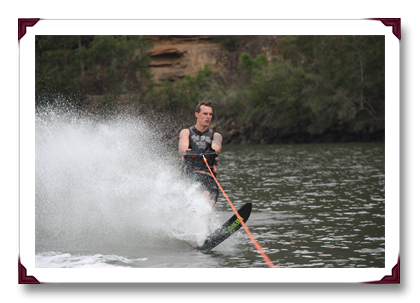 Went up to Kollondilly, after we returned from Queensland. Brendan invited his friend Nathan, along, for the week. 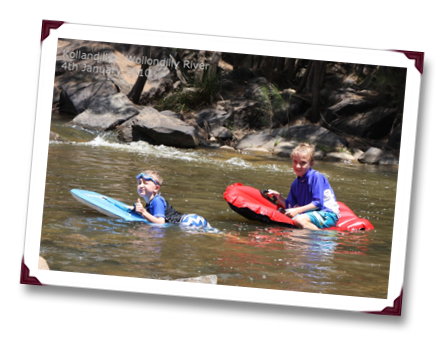 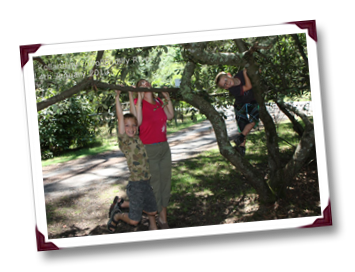 We didn’t have the best weather, though the boys enjoyed themselves, and

one of the few hot days, we spent looking at Wombeyan Caves 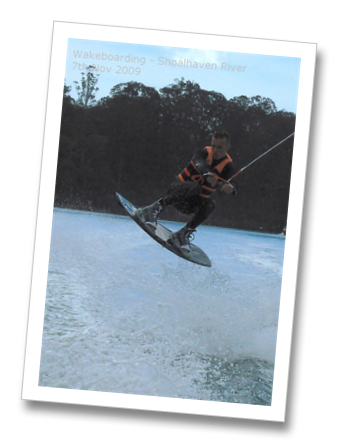 The weather didnt look promising as we packed to go, and by the time we reached the river there was a constant drizzle
We went ahead ( much to Kylies disgust) and put the boat in the water, by which time the rain had stopped, and we headed up river….. 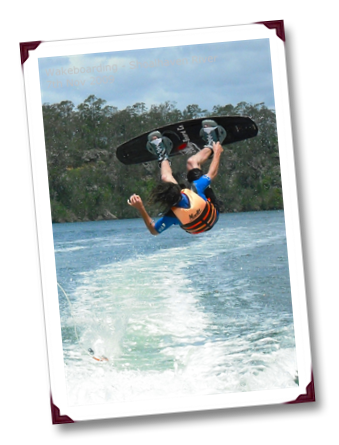 There wasnt many boats out ( surprise that, with the weather) and the water was smooth & warm.
Chris’ shoulder was still sore, from last week

though he managed to get some air today
Jarrad’s mate, Dane, came along and entertained us with some impressive face plants, though he did get up 1st time!
Jarrad tried some back flips but …..couldnt quite make them 😉
The rain cleared, and we had some warm sunny patches, so it ended up being a good day, though Chris agravated his shoulder injury, and Jarrad had a sore head from his crashes, which mainly came from trying to do 360 degree spins, though he did pull a few off!
Will add the photos in a day or so

No tweets to display