What is that noise? No not David or Brendan snoring, it is the wake up call (another 6am start ),only feels like I just closed my eyes. So I kick David out of Bed for a shower & try to phone mum as we got her message just before we went to bed & was way too late to phone back, no luck working that blasted thing, have to now wait for David, she was just checking in as they saw a lot of the demonstrations in Bangkok on the TV but all ok. Eventually woke Brendan & went down for a quick breakfast as we were being picked up at 7am. We saw a little of Singapore on the way, looks nice so far. We went & checked in… no delays, yahoo the day is going well. 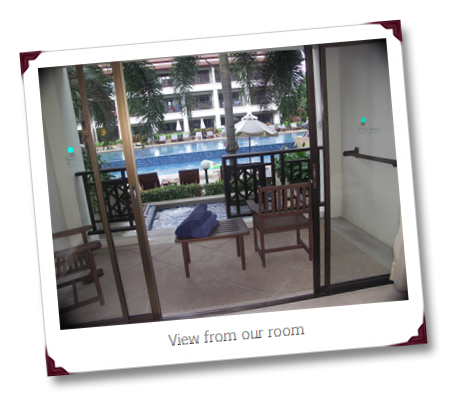 Pass immigration & check out the duty shop while we wait for boarding. We are sitting in row 22 seats D,  E &F. Silk airlines, much narrower seat and no individual screens as only 1 1/2 hour flight ( Boeing a320).

We have arrived. now to find the tour group who we were being picked up from.yes we were supposed to be here yesterday but the plane was delayed.ok we will wait for another vehicle, its not like we have a lot of choice. We were finally picked up in an older mini bus & bought to Patong Beach, the roads were pretty good. David commented that it looks a lot like Bali.  Oops  we have rain…We arrive at the Deevana Hotel & Spa & check in, have a nice welcoming drink & refreshing cool towel to wipe away the grime. We are shown our room. 3 single beds, o oh, but no worries they will come & reorganise, Brendan quickly gets undressed & checks out the private spa (which we have since learned is not heated ) then heads over to one of the main pools, located about 10m from our door step. David & I go thru all the brochures & then sit outside in our courtyard to watch Brendan play. It starts to rain but doesn’t last long & comes out very steamy, Brendan stayed in the pool & made friends with a few of the other guests.

Once we dragged Brendan from the water we donned our thongs & headed out to have a look around. We walked for what seemed ages & it was very humid so we were a bit sticky. After telling the 1000th tuk tuk driver we were ok & advising various store owners we were “just looking ” we found an ice creamery & ventured inside. Mmm yes it was air-conditioned..a welcome relief although David broke out in a bigger sweat once we were inside! Brendan had a strawberry ice cream in a waffle cone with chocolate & sprinkles on it, David had a cup with a concoction called macadamia crunch, I had a cup with a choc mint mixture (was like cold rock where they mix up on a ice cold plate) once we polished that off we set out again. We went up a small alley & ended up buying Brendan a pair of billabong shorts my first bargaining attempt here, I wasn’t very comfortable especially as I wasn’t sure about what you would expect to pay to begin with.I ended up paying 650b when the original asking price was 1100b. We walked back to the resort via a family mart which is like a 7/11 store, we picked up some chips & drinks to bring back to the room. once we finally got back  we all peeled off our clothes & headed for the pool, it was like bath water..nice & warm (much to David’s disgust) we played around for an hour or so & cleaned up for dinner. David was the only adventurist he had chicken with green curry, & gees did it have a kick..I settled for chicken Kiev & Brendan had spaghetti bol all though neither tasted like we were use to, once dinner was finished around 8pm we came back to the room & all were asleep by 9.pm we were all exhausted.